Many biblical tales were falsely and forcibly pinned down to the history and land of Ancient Egypt, such as the story of the Israelite Patriarchs, Abraham and Joseph and of course, the notorious story of the Exodus, also known as the story of Pharaoh and Moses.

One of the most renowned biblical tales that was also oddly linked to Ancient Egypt is the one called “The flight of the Holy Family into Egypt”. For all I know there was but one holy family that Ancient Egypt was familiar with and that was of King Osiris (the slain god, who rose from the dead), Mother Isis (the devout wife who was impregnated by Osiris’ holy spirit) and their son Horus, the son of (the living) God. Do we discern a prototype here?

As we were made to believe that the god of the Israelites watched over Moses and his people as they exited Egypt, therefore it was the least expected of that god to once again dispatch his angels to safeguard Baby Jesus and his Mother during their journey across the land of Egypt.

But this common perception couldn’t be further from the truth, for neither the story of The Exodus nor the Fleeing of the Holy Family took place on Egyptian soil. Both of those biblical tales are simply unverified accounts that have been propagated by deceptive rabbinical and Christological authorities.

The popular tale of the advent of the Holy Family to Egypt, seeking refuge, is one of the biblical stories the (Egyptian) Coptic Church takes tremendous pride in. The first cluster of Egyptian churches and monasteries were actually erected on places that were claimed to have been visited by the Holy Family during their (pre-destined) journey in Egypt. The alleged route the Mother and Child Jesus took during their journey extended all the way from the rugged terrain of Sinai, passing through the Nile Delta and then sailing across the Nile where they finally reached, Mount Qussqam, which is 327 km south of Cairo.

The Monastery of Al-Muharraq nestles against the western foothills of the Mountain. It was built around the area where the Holy Family were said to have stayed for over six months. Their time was spent mainly in a cave which became, in the Coptic era, the altar of the Church of the Virgin Mary, built at the western end of the Monastery compound. The altar stone has become a focal point for Christian pilgrims since it was claimed that Child Jesus used it as a resting place during the months He dwelt in the cave.

As we said, the story of Christ, The Child’s flight from Bethlehem with His family to Egypt and the eventual return of Christ from His sanctuary in Egypt, is not a verifiable historical event, but rather the whole story was built on mythical ground, or what the biblical scholars would like to refer to as prophecy.

To be more specific the whole story was created as a twisted interpretation of this renowned verse from the Hebrew Bible “Out of Egypt I called My Son” (Hosea 11:1).

The reason we deem it a twisted interpretation is that the biblical verse did not specify who that Son of God was. At the time of Hosea, many were called sons of the Lord/God. Even kings and Emperors enjoyed that holy designation. We know the Assyrian and the Egyptian kings were referred to as sons of God. And as we mentioned earlier, Horus was indeed a divine son of god.

If we judged by the typological line of thinking the biblical scribes notoriously adhered to in their stories, we should think of Moses as the figure meant by ‘My Son’ in this verse. But there is one downfall to this vague prophecy. In its original version the Hebrew text says nothing about Egypt; rather it goes like this “Out of Mizraim comes my Son”. Ironically, at the alleged time this Hosea book was written, around the 8th century BC, the Land of Egypt was not called ‘Mizraim’.

Ancient Egypt was known as “Copt/Gopt” which was later pronounced in the Greek tongue as “Aegyptus”. Mizraim (mistranslated as Egypt) was an ancient Arabian designation of any urban city. In that sense, any of the major cities across the Ancient Near East such as Damascus, Tyre and Palmyra were designated ‘Mizraim’ by the nomads of ancient Arabia and Yemen.

That in a way should draw our attention to the Arabian origin of the Israelites and their Mosaic Laws, as detailed in our book “Egypt Knew No Pharaohs Nor Israelites”. Contrary to what the masses have been made to believe over long centuries of deception, all the ancient Israelite stories took place in Ancient Yemen and not Palestine. The name ‘Hosea/Hoshea’ is as Arabic as ‘Ismail’ and ‘Hussein’, and so are his stories, prophecies and book.

The vague prophecy of “out of Egypt comes my son” was later cleverly exploited by the Roman/Catholic church in their (Greek) Gospels. Only one gospel, that of Matthew, made use of this old biblical prophecy. Employing the same literal technique of typology, Matthew (or whoever used the name as a cover-up) had woven a whole new drama for Baby Christ and his Mother out of the old story of Moses.

Since the deliverance of Moses and his Israelites only occurred as they exited Egypt, the same (typological parallel) had to happen in the story of Jesus Christ. Just as Pharaoh of Egypt ordered the killing of all first-born Israelite infants, Matthew had to make Herod issue a similar order so that it would serve as the dramatic imperative for their flight into Egypt.

“…Behold, an angel of the Lord appeared to Joseph in a dream, saying, ’Arise, take the young Child and His mother, flee to Egypt, and stay there until I bring you word; for Herod will seek the young Child to destroy Him’” (Matthew 2:13).

It is like a game of words in which biblical scribes duplicated/copied an ancient miraculous tale. In the process they ended up creating dramatic and geographical parallels to an older (biblical) story that would make their new one look holy in the eyes of the uneducated masses. The ultimate goal of this typology trick is to create the illusion of a prophecy come true.

The flight into Egypt is a biblical event described in the Gospel of Matthew (Matthew 2:13-23), in which Joseph fled to Egypt with Mary and her Infant Jesus after a visit by the Magi, because they learned that King Herod intended to kill the infants of that area.

The Gospel of Luke does not mention this event, relating instead that the Holy Family went to the Temple in Jerusalem, and then directly home to Nazareth. Some critics thus conclude that both Luke’s and Matthew’s birth and infancy accounts are fabrications. That theme in the Gospel of Matthew is likening Jesus to Moses for a Judean audience, and the Flight Into Egypt illustrates just that shrewd typological theme.

In their escape from the fury of King Herod, the Holy Family, understandably, had to avoid the well-traveled roads, so they followed unknown paths that were said to have been guided by God’s angels. Their way was chosen for them, day after day, through hidden valleys and across uncharted plateaus in the then rugged wastelands of Sinai. While a safer and faster sea travel was available, but like Moses and his Israelite people, Mary and Baby Jesus had to wander for a while across the wilderness of Sinai. The old (Exodus) scenario had to work as a kind of storyboard for the new (Flight into Egypt) story.

Then one has to wonder as to what/who was the source that informed us with the full description/account of the Journey the Holy Family made across Egypt? The tortuous trails the Holy Family followed in their passage across Sinai, and their subsequent travels within Egypt, were narrated by Pope Theophilus, 23rd Patriarch of Alexandria (384-412 AD). He mentioned, in his celebrated annals, that on the eve of the 6th of November, after long and humble prayers, the Holy Virgin revealed herself to him. The Holy Virgin related the details of the Holy Family’s journey to, from and in Egypt to Pope Theophilus and instructed him to record what he saw and heard.

There we have it; the whole account of the travels the Holy Family made during their stay in Egypt is actually nothing but a dream. And because it was the dream of Pope Theophilus, the gullible and faithful masses had simply accepted it as a real occurrence, another divine miracle that yet had to unfold on the land of Egypt.

But then again, who is this Pope Theophilus that Mother Mary entrusted and chose to reveal herself to in one of his blessed dreams. Theophilus was the Pope of Alexandria and Patriarch of the See of St. Mark of the Coptic Church in Alexandria at the turn of the 4th century CE. He became Pope at a time of conflict between the newly dominant Christians and the ancient Egyptian religious establishment in Alexandria, each of which was supported by a segment of the Alexandrian population. It was during his papacy, followed by that of his nephew (the notorious) Pope Cyril, that the persecution of the followers of Ancient Egyptian beliefs and traditions turned ruthless and violent.

Ancient Egyptian temples were desecrated and closed or burned down. Egyptians were banned from upholding their ancient religious rituals as they were denied entry to their temples and sanctuaries all over Egypt and specifically inside Alexandria. The ‘Serapeum’, the last structure/sanctuary to have survived from the Ancient Library of Alexandria was destroyed and burned up in flames, for the Coptic Church wanted to be the only source of knowledge and authority for the newly fledging Christian Egypt.

Edward Gibbon described Pope Theophilus as “…the perpetual enemy of peace and virtue, a bold, bad man, whose hands were alternately polluted with gold and with blood.”

The scrolls and books that once enshrined humanity’s ancient knowledge and wisdom were deemed (by Theophilus and his nephew, Cyril) pagan filth/heresy that only deserved to be consumed by fire. After the departure of Theophilus, the religious intolerance and violence in Alexandria spiked to new heights under the papacy of his nephew. 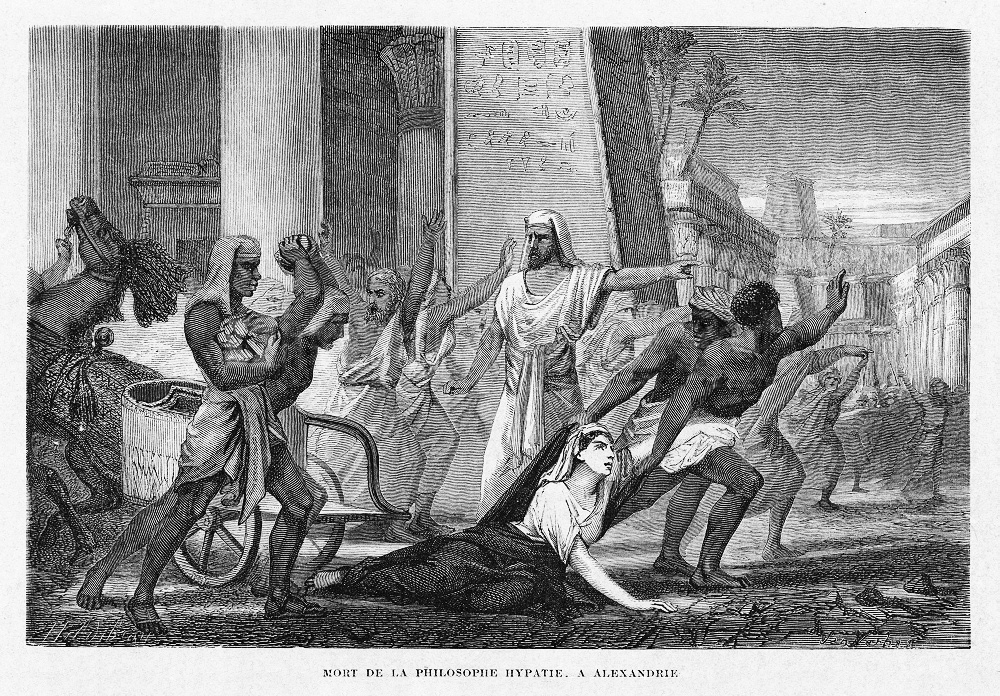 Cyril kept his policy of inflaming sectarian tensions that led to the murder of the Hellenistic philosopher Hypatia by a Christian mob. Hypatia was one of the last distinguished scholars of the Ancient Library of Alexandria. She lectured in astronomy, philosophy and mathematics and had considerable moral and political authority in the ancient city of Alexandria. Hypatia was kidnapped, stripped naked and then gang-mutilated and burned alive inside a church. News of Hypatia’s murder provoked great public denouncement against Cyril who only saw the great philosopher as a (pagan) witch.

Hypatia’s brutal murder had in a way marked the demise of the world’s ancient wisdom and knowledge. As the (gullible) masses bought into the ‘Mother Mary’ dream of Theophilus, the dawn of the Dark Ages was looming near. A new era was being born out of the deceptive biblical narrative about Ancient Egypt, a new era stifled with obscurantism, intolerant dogma and false prophecies.

30 thoughts on “Is Holy Family’s flight into Egypt Myth?”