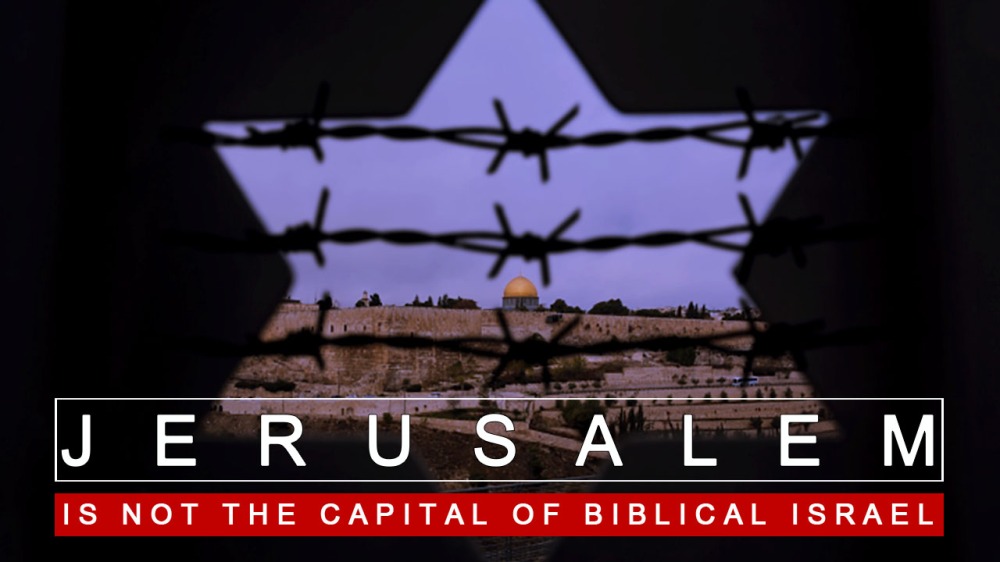 If historically, Jerusalem is indeed the city of King David, I wouldn’t have been angry with Trump’s foolish decision to move the US Embassy there and I wouldn’t have bothered with writing this piece. But the historical truth of the matter is that modern-day Jerusalem was never the capital city of David’s kingdom.

Many thought that building a wall along the American-Mexican border was the most stupid promise Trump had come up with during his electoral campaign. But actually it wasn’t, moving the US Embassy from Tel Aviv to Jerusalem is. Trump’s decision has rejuvenated the Zionist ideology of illegal occupation and apartheid that some Zionist fanatics perceived the move as “bigger than Balfour” – so much for those analysts who supported Trump as they viewed him the candidate who will perform as the anti-establishment President. Little did they know that the only establishment Trump cares about is his own.

But has moving the US Embassy come as a surprise? Actually no, contrary to his predecessors, Mr. Trump wants to be the first US President to actually make good on many of his electoral promises (no matter how stupid they are). Maybe he wants this to be remembered as his presidential legacy.

But that could hardly be the sole purpose of this ill-advised move, for relocating the US Embassy from Tel Aviv to Jerusalem will surely grant Trump the (much needed) support from the Jewish lobby and its deep-pocketed organizations and the religious right of Zionist and Evangelical Christians.

Not to mention that this US embassy stunt will serve as a diversion since many scandals are currently threatening Trump’s presidency and turning the White House into a circus.

It seems that nothing could save the day for Trump except by making Israel “great again”.

Trump’s move, though is a dumb move, might give rise to serious political repercussions, and possible violence (and more extremism and terrorism) in the Middle East and beyond. While on the other hand it might not, bearing in mind that the EU, the Arab and Islamic world are opposing this outrageous decision.

But what Mr. Trump doesn’t quite realize is that his decision is extraordinarily ignorant from a historical point of view, and that’s why I believe it is dangerous at the same time. Ignorant, for neither he nor his circle of advisors have been educated/informed by (unbiased) academic scholars of the ancient history of the Near East that Jerusalem is not the historical city of ancient (biblical) Israel. Dangerous, because this reckless move will help solidify that falsified concept about Jerusalem in the collective subconscious of the uneducated masses worldwide.

The distorted mainstream narrative/pretext for occupying the Palestinian city of Jerusalem (as well as the rest of Palestine) is that it was the capital city of the magnificent kingdom of David and his son Solomon.

The seemingly indisputable pretext among the fathers of the Zionist movement is that Palestine is their historical land upon which many of the stories of the Patriarchs took place. They also unequivocally view Jerusalem as the city established by King David back in the 10th century BC.

Building on that fake pretext the Zionist movement (supported by Great Britain and US in the first half of the 20th century) have been encouraging European converts to Judaism to envision the Arabian land of Palestine as their lost/ancient Land that was promised to Abraham and his Israelite descendants. The funny thing that had eluded thousands of European Jews who later settled in Palestine is that they are not the descendants of Abraham or his Israelite tribe, but rather of the Khazar Kingdom.

If Muslims of China and the Philippines cannot claim historical right to the city of Mecca as their ancient capital, so should not European Jews the city of Jerusalem. The same logic applies.

The Holy City of Jerusalem first appears in the descriptions of the Bible during Abraham (1850 BC). It was in that city that Abraham was received by a mysterious priest/prophet of God who was named as the highest Melchizedek (honest king in ancient Arabian/Hebrew tongue) and who was also the King of Ur-Salem. Salem in Arabic signifies peace and Ur-Salem/Jerusalem signifies the City of Peace. You see, the whole vocabulary of the stories of the Israelite patriarch is genuinely Arabian.

Another telling detail the bible tells us, is that before David conquered the biblical city of Jerusalem, it was inhabited by a tribe called the Jebusites (2 Samuel 5:6-7), and that Jerusalem was securely situated, like a fortress, on a mountain top.”

But what is perplexing is that during both the time of Abraham (19th century BC) till the time of David’s conquest of the city (10th century BC), Jerusalem did not exist as a territorial entity on the map of the ancient Near East and specifically the Levant. Simply the city was not there yet.

There was no Jerusalem that could have accommodated the stories of Abraham back in the 19th century BC, or David and his son Solomon in the 10th _ 9th century BC.

Not to mention that the ancient history of Palestine never witnessed a people/tribe by the name of Jebusites of whom we could only find historical trace in Ancient Arabia and Yemen with its mountainous terrains and villages – that dovetail well with the biblical geographical narrative.

“The rise of territorial states in the Levant was an outcome of the westward expansion of the Assyrian Empire in the early 9th century BC. Moreover, neither the Assyrian nor the Egyptian records made any reference to this so-called kingdom of David and Solomon. Indeed extra-biblical sources leave little doubt that all major states in the region; e.g. Damascus, Moab and of course Jerusalem emerged after the 9th century BC. It is extremely difficult to envision a united Israelite kingdom that ruled from Jerusalem a century before this process.

Most annoying of all over a century of archeological exploration in Jerusalem, the (supposed) capital of the glamorous biblical united Monarchy of Israel failed to reveal evidence for any meaningful 10th century BC building activity. No sign of magnificent palaces or great states has been found in the archeology of this period. To make a long story short, Jerusalem in the 10th century BC of the time of David and Solomon was not more than a remote highland village and not the exquisitely decorated capital of a great Empire” wrote Prof. Israel Finkelstein, the Israeli archeology in his book “The Bible Unearthed”.

As for the actual location of biblical Jerusalem, other scholars of ancient history give us some clues as to where we could spot it on the ancient map of Arabia and Yemen. The city of Jerusalem according to the Torah, is located on a mountain, that’s why Judaism’s holiest site is designated “The Temple Mount”. But when we look at the ‘Google map’ of nowadays ‘Jerusalem’ we will be surprised to discover that it is not located on a mountain, but rather between two low hillsides. Isn’t that a bit strange?

Al-Aqsa Mosque and The Dome of the Rock (Temple Mount for the Jews) are situated at the lowest point in Jerusalem’s topography. The question is, where on (Google) earth is the mountain that is mentioned in the Bible? Will it come with Trump’s embassy? – No sarcasm intended.

Even more, the huge wall modern-day Jews pray and sway before is neither the western nor even the eastern remaining wall of the Temple. But oddly enough, it is one of the Roman (pagan) walls of some military camp that goes back to Herodian/Titus era.

Jerusalem could be the place where the Herodian Temple (37 BC–70 A.D.) once stood but it is definitely not the land of the first temple or that city which witnessed the stories of the early Israelite patriarchs.

Jerusalem is not the historical city of David nor is it the capital of biblical Israel. That’s why it should never be acknowledged as the Capital city of modern-day Israel.

The current location of both the Temple Mount and the whole of the state of Israel is based on an Ideology; downright fake and deceptive. Mr. Trump’s ignorant decision to move the US embassy to Jerusalem has made it all the more deceptive.

More on the subject by Dr. Ashraf Ezzat:

Egypt knew no Pharaohs nor Israelites

Jerusalem: Nothing holy about the Holy City

70 thoughts on “Mr. Trump, Jerusalem is not the capital of biblical Israel”