“The (crazy) idea of bringing world’s Jews to leave their homelands, settle in the occupied (Palestinian) land and ‘inventing a Jewish People’ out of them is the real ‘theatre of the absurd’. ”

In a recent and exceptionally bold and daring UNESCO resolution on the historical sites in the old city of Jerusalem, Israel is explicitly referred to as “the occupying power”, the Western Wall is mentioned by its Arabic name, the Al-Buraq Plaza and the Temple Mount as Al Haram Al Sharif. In other words, after years of research and investigation the United Nations Educational, Scientific and cultural Organization (UNESCO) has failed to find genuine HISTORICAL Jewish roots in the ancient city of Jerusalem. How shocking is that?  And how true is that as well?  Oh, you’d be surprised.

UNESCO’s Executive Board has been meeting in Paris from October 4th. After a week of scrutiny and deliberation UNESCO has decided that there is no Jewish connection to Jerusalem and the Temple Mount. The vote on the resolution, which was submitted by Algeria, Egypt, Lebanon, Morocco, Oman, Qatar and Sudan, had been postponed from July. However, a previous similar resolution was approved in April.

26 countries abstained from the vote while 24 countries supported the initiative and six voted against it, namely, US, UK, Lithuania, the Netherlands, Estonia, and Germany.

The resolution “strongly condemns the Israeli escalating aggressions and illegal actions in Eastern Jerusalem. It also deplores the illegal Israeli measures that deny Muslims’ access to their Holy Site Al-Aqsa Mosque/Al-Haram Al Sharif, and requests Israel, the Occupying Power, to respect the historic Status Quo and to immediately stop these measures”. Read the whole text of the UNESCO decision here.

“Obviously they have never read the Bible, but I would advise UNESCO members to visit the Arch of Titus in Rome, where they can see what the Romans brought to Rome after they destroyed and looted the Temple Mount two thousand years ago” Netanyaho added.

On face value what Mr. Netanyaho said would sound for many as persuasive as common sense. But, actually it is not. Moreover, the UNESCO resolution is neither politicized nor biased.

Actually, the parallel Mr. Netanyaho drew is invalid. The link of the Egyptian and Chinese people to the Pyramids/Great Wall is primarily based on their common history and culture as a nation/ethnic group, therefore the link is culturally indisputable.

The Temple Mount (if indeed there was such a thing in Palestine) is only as relevant to the Jews as ‘Mecca’ to any Muslim worldwide.

To put it in a nut shell, Judaism is a religion, the followers of which should not be entitled to any historical rights over the land of their holy sites.

Just as Latin Christians cannot (and should not) claim “Vatican’ as their historic homeland, neither should European Jews Jerusalem.

Unlike the Egyptian and the Chinese people the Jews are not a nation/ethnic group that has a common culture/land/history. For crying out loud Simon Peres, the late Israeli President was a European citizen from Poland who should have never come to Palestine in the first place.

But, here we are, not only did Peres (Szymon Perski) come to Palestine but he also lived long enough to see to it that most of its native people kicked out by brutal force and deceitful diplomacy. For that, Peres, a war criminal in essence, has been buried in Palestine as an Israeli national hero.

The Jews who were conquered by the Roman Emperor Titus were a small community that once inhabited part of Jerusalem two thousand years ago. The long-held perception that a Jewish Diapora took place afterwards is merely a myth; the Romans did not exile anybody from Palestine, least of all, the Jewish community. The descendants of those ancient Jews are most probably the Muslims and Christians of modern day Palestine.

The modern Israeli state was founded on belief in a “Jewish people” as a unified nation, established in biblical times, scattered by Rome, stranded in exile for 2,000 years, and then returned to the Promised Land.

But according to Shlomo Sand, the Israeli historian, there was no exile, and as he seeks to prove by dense forensic archaeological and historical analysis, it is meaningless to talk today about a “people of Israel”, at least not if by that you mean the Jews.

The Jews who have recently migrated from Europe to Israel are descendants of Khazars, and if they feel homesick they’d better settle in Ukraine and Russia (or Poland as the case with Peres), but not in Palestine.

Jews are like Muslims and Christians; they come in all colors, sizes and cultures from all around the world. The (crazy) idea of bringing world’s Jews to leave their homelands, settle in the occupied (Palestinian) land and ‘inventing a Jewish People’ out of them is the real ‘theatre of the absurd’.

In a frantic response to the (expected) UNESCO resolution, the Israeli Ministry of Foreign Affairs has released a brochure of the historical Jewish connection to Jerusalem, which has been distributed to all 120 permanent delegates to UNESCO whose countries have diplomatic relations with Israel. Highlighted in the Israeli brochure is a photo of the triumphal Arch of Titus which commemorated the Roman Emperor conquest of Jerusalem back in 70 AD. Engraved on the arch is the seven-branched menorah, which is widely regarded as a Jewish symbol.

Indeed the Roman Emperor Titus had led a huge army and conquered the ancient city of Jerusalem. As a matter of fact Titus left Jerusalem in complete ruin.

“Now the Romans set fire to the extreme parts of the city [the suburbs] and burnt them down, and entirely demolished its [Jerusalem’s] walls” Josephus (War VI. 9,4.)

Christians are aware of four prophecies given by Jesus in the New Testament that there would not be one stone left upon another, either of the Temple and its walls or even of the City of Jerusalem and its walls (Matthew 24:1,2; Mark 13:1,2; Luke 19:43,44; 21:5,6.). But strange as it may appear, the walls surrounding Al Haram Al Sharif still remain in their glory with their 10,000+ Herodian and pre-Herodian stones solidly in place in their lower courses. If those stones are those of the Temple, the prophecies of Jesus can be seriously doubted as having any historical value or merit in any analysis by intelligent and unbiased observers.

According to eye-witness accounts of Titus ruthless campaign, everything in the ancient city of Jerusalem was leveled to the ground; markets, official buildings, houses and of course the Jewish Temple and its surrounding walls. So, if that was the (historical) case, then what on earth is that huge wall modern day Israel calls the “Western Wall”?

What Mr. Netanyaho did not mention, though I ‘m quite certain the Zionist historians are aware of, is that Titus demolished almost every building that had once stood on the ground in Ancient Jerusalem except for one construction, his Roman military fortress.

What we have come to know as the Western Wall is but one of the remaining walls of that Roman fortress, aka Fort Antonia.

American archaeologist and author, Professor Dr. Ernest L. Martin (1932-2002) had conducted archaeology work in East Jerusalem. In his controversial book ‘The Temples that Jerusalem Forgot’, published in 1999 – following his extensive fieldwork – Dr. Martin concluded that Muslim holy sites, Al-Aqsa Mosque and the Dome of Rock are not built on top of the Temple Mount ruins.

Several other historians – including Professor Benjamin Mazar, former President of the Hebrew University – had reached similar conclusion that the 45-acre site known as Haram al-Sharif to the Muslim world since 638 CE is in fact a Roman fortress built by King Herod and that the Jewish holy Wailing Wall (the Western Wall) had never been part of the second Temple destroyed in 70 CE.

Actually if you come to think of it, the UNESCO resolution on Jerusalem is not as shocking a revelation as finding out the truth about the so called “Western Wall”. I mean to suddenly discover that millions of world Jews have been praying (and wailing) to a (pagan) Roman wall is ludicrously painful. Archaeologists cannot conclusively point to stones they know comprised the Second Temple, let alone the first one. Equally painful is the fact that the experts and historians commissioned by UNESCO did not manage to find any Jewish connection to the place the Zionist Israelis call “Temple Mount”. 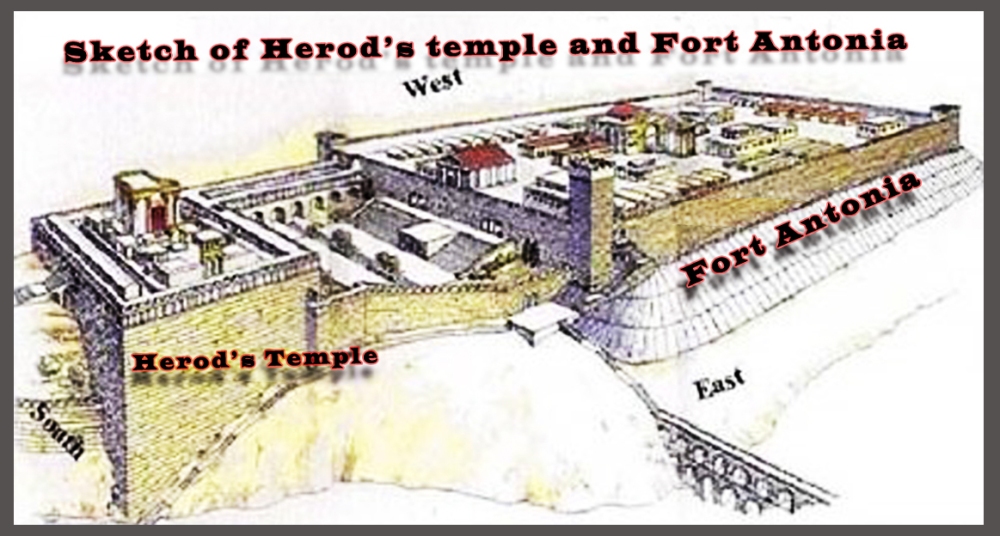 The historicity of the site kicked off as Al Aqsa mosque that was originally a small prayer house built by Caliph Umar, but was rebuilt and expanded by the Umayyad Caliph Abd al-Malik and finished by his son Al-Walid in 705 CE. Like it or not, that is what the historical records tell us about that ancient site.

But then again, many will find these new revelations quite disturbing, for as Mr. Netanyaho said what is mentioned in the Bible tells a different story. The Bible says that the Jewish Temple as well as all the Israelite stories somehow took place in Jerusalem. Could the Bible be wrong?

Wrong is not the Bible, but it is how the world has come to interpret the book and the stories in it. First of all the Bible has never said anything about Palestine, but rather it was made clear in the book that the land the ancient Israelites settled in was called ‘Canaan’.

In other words what the (Hebrew) Bible repeatedly mentioned as ‘Jerusalem” is not geographically located on the ancient land of Palestine.

Hence, all the Israelite stories (of Abraham, David, Solomon and Moses) have actually taken place in another land, far away from Palestine and Modern day ‘Israel. In that ancient land is where the original Israelite (first) Temple once stood.

This is not a conspiracy theory but it is the hidden truth. To help you digest these shocking new revelations let’s stimulate your critical thinking with some historical facts that will again help you differentiate between Palestine and Canaan.

The place the Israelite slaves conquered after their Exodus is biblically referred to as ‘Canaan”.

If, historically speaking, the land of Ancient Palestine was, at any point in ancient times, referred to as Canaan then we could have a basis/common ground for considering modern day ‘Jerusalem’ as the biblical city of David and Solomon.

But never was Palestine called Canaan and never had Jerusalem been the city of David. “Canaan” is a biblical designation that has been fraudulently projected by (western and biased) scholars on the land of Palestine.

What is absurd is not the UNESCO resolution; rather it has all along been our (false) reading of the biblical History and that of the Ancient Near East.

46 thoughts on “UNESCO Resolution on Jerusalem: The Hidden Truth”