“The West is up against the East; that is what this incredible film comes down to”

Rare are the films that make me want to go to the movie theater, Cinema as called in Egypt, to watch them. “300: Rise of an empire” is one of those exceptional films.

It is an epic film that somehow turns you into a screen-gazer for almost 100 minutes.

The Zack Snyder epic film is a fantasy war film about the Greco-Persian wars that supposedly took place in classical antiquity.

No Persian record of those wars exists. Only the Greek side of the story is documented by Herodotus, not a very credible source I’m afraid.

300: Part 2 is a mind blowing 3D historical drama that will also subconsciously inject you with a considerable dose of racism and cultural conflict/prejudice as the Persians stand for the cultures and peoples of the East and the Greeks stand for the root of all western culture.

The West is up against the East; this is what this incredible film comes down to.

The Persian warriors in the film are mainly mercenaries and slaves, whipped all the time and bound down by chains, who get humanly paled out when compared to the Greek’s noble army of farmers, poets, and sculptors (goodness me) 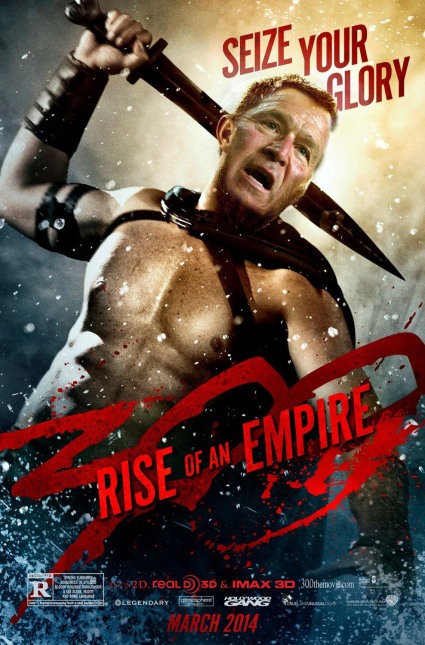 The Persians in the film harbor an obviously embedded hate for the Greek/west democracy and freedom.

It’s as if history hasn’t shown us over and over again that wars are always waged out of greed and lust for control over rich resources.

As the Greek General Themistokles (Sullivan Stapleton) was kindling the spirit of his warriors, before they attacked the Persian navy fleet, with all his fiery talk about dying for the sake of freedom and democracy, somehow the image of George W. Bush suddenly popped up in the back of my mind uttering his famous & stupid quote “They hate us for our freedom”

It has been a while since I last went to the cinema.

But going back to the cinema has awakened me to the fact that good cinematic works should be viewed in the proper way and place films should be screened, in a film theater.

Yes indeed, it makes a world of difference in a cinema. The moment you buy the ticket and get into that dimmed theater, with all the dark walls and big screen in front you know you want to spend the next couple of hours in some fantasy land.

Of course I have seen the original 300 film that was produced back in 2006 but not in the cinema theater.

Since I was visually dazzled by the first/original part, I knew for sure that I wouldn’t miss out on the premier screening of the second part in Egypt.

For an amateur filmmaker like me, who spent the last couple of years getting started on special effects and 3D animation techniques, this 3D masterpiece of visual and audio effects has indeed proven fully rewarding.

The film is simply audio-visually stunning. The reason I mentioned audio effects first is that with no sound, and I mean here the music mixing and sound effects, the film would have lost that hard hitting power of captivating the audience from the first moment.

Synching the sound effects with the visual effects, thrusting swords, flying arrows, warriors in combat and ships amid an ocean of fury and fire was a perfect job worthy of an academy nomination.

Well, it’s not only a matter of synching the audio effects but the effects themselves are totally of new sound and edge.

And you want to watch this film in a theater equipped with a good quality surround theater speakers to really appreciate the rich and profound sound track.

The imagery of this epic film has been no less epic. With this Zack Snyder’s film the green screen has been taken to a new level of turning dreams into visual realities.

Scenes shot/rendered in high dynamic range (HDR) with dramatic backgrounds and vibrant optical flares have managed to give the viewer a new quality of imagery and enhanced the epic drama.

The real power behind this film is due to the highest state of the art work of the special effects team and supervisors.

3D animation and matte painting has never looked so real and mind blowing. The low key lighting and the almost monochromatic tint of the scenes have added to the epicness of the drama.

The original film revolves around King Leonidas (Gerard Butler), who leads 300 Spartans into battle against the Persian “god-King” Xerxes (Rodrigo Santoro) and his invading army of more than 300,000 soldiers.

Rise of an empire is a follow-up to the 2006 film, taking place before, during, and after the events of that film with a fictionalized retelling of the Battle of Salamis (all parts of the Greco-Persian wars that took place around (499-449 BC)

The film tells the story of the Greek General Themistokles battling against the massive invading Persian army of Xerxes, which is in turn led by Artemesia (an evil and tantalizing Eva Green), the commander of the Persian forces.

The sequence of Xerxes turning into a God – King is breathtaking and his majestic appearance before his subjects looked legendary indeed.

Sullivan Stapleton was the man for the job; commanding, with a strong built and looked terribly clever and handsome with the sword.

Eva Green, with the professional help of an extremely talented costume designer and makeup artists, gave the audience one of her best yet performances. This young and pretty lady has a lot to offer in the years to come.

The sea battles are beautifully shot and choreographed. The love scene between Artemesia and Themistokles is so passionate and wild and it added a lovely breeze to the agitated and violent scenes of the film.

The finale of the film though absolutely climactic and triumphant, nevertheless the filmmaker, Israeli-born Noam Murro, left the door wide open for a third sequel to this epic drama.

I advise everybody to go and watch this blockbuster in the cinema theater and don’t forget to take your 3D glasses.

One more thing, before going to the movies leave behind all your cultural/racial prejudices and make sure you don’t get out of the theater with new ones.