“Obviously, I was watching the Ukrainian version of the Tahrir Square revolution.   Is it a coincidence? Is it only my imagination?  … I don’t think so” 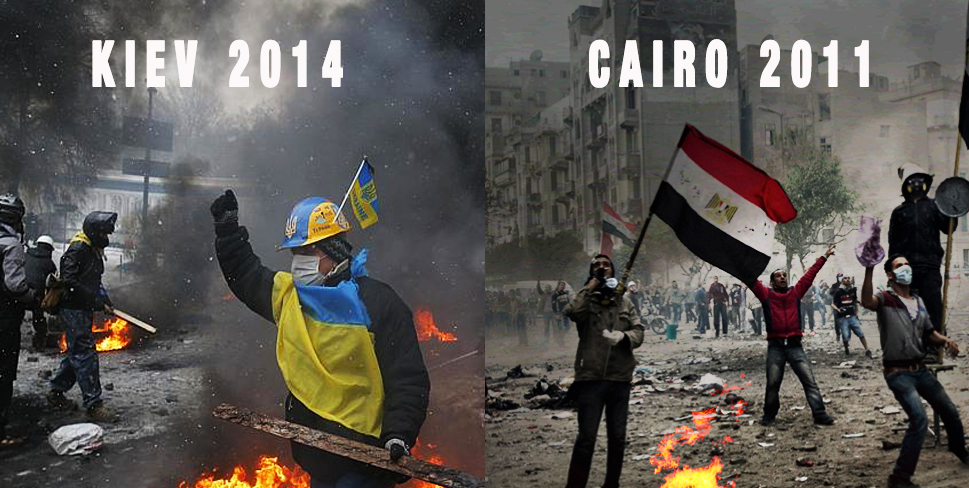 Though I’ve never been to Ukraine or Russia before but the minute I started following the news of the huge protests in Kiev, I felt like I was somehow connected /related in a strange way to this Ukrainian revolution.

This whole revolution thing sounded not so unfamiliar to me.

As days went by and as the violence and the smoke that came out of the heavily fortified Maidan/independence square got heavier I thought I was looking at a retrospective of the Egyptian revolution with all the violent clashes that took place in Tahrir Square during the winter of 2011-2012.

My Egyptian eyes were following the fluid situation in Kiev with a funny sense of uneasy prediction. I felt like I knew how things were going to unfold in that Ukrainian scene, simply because I had seen it happen before in my own country, Egypt.

Of course I know that because we had a recent revolution in Egypt doesn’t necessarily make it the blueprint for all revolutions to follow across the globe.

But the way things evolved inside Independence Square and the pattern of violence and chaos that ensued around Ukraine left me in no doubt.

Clearly, I was watching the Ukrainian version of the Tahrir Square revolution.   Is it a coincidence? Is it only my imagination?  … I don’t think so.

Every day I followed the Ukrainian news with a silly grin on my face for I knew, beforehand, what the headlines were going to be.

I knew that whoever called for the protests are groups of so called political activists, very active on the internet social media sites.

Also Egyptian activists who sparked the first mass protests on January 25 2011, like April 6th movement, have been trained by Srđa Popović, a Serbian activist who’s been cooperating with US intelligence companies in clandestine missions .

Popovic is the leader of the student movement Otpor that helped topple Serbian president Slobodan Milošević. He is also the director of Centre for Applied Nonviolent Action and Strategies (CANVAS) which is very active in Eastern European countries including Ukraine.

They are even trained on how to exploit all kinds of media to spread their disingenuous message internationally – like this interesting video of a Ukrainian beauty fighting for freedom and struggling for western democracy from inside Independence Square.

The woman’s call for world solidarity, that went viral on YouTube, is carefully edited to portray the Ukrainians as if they were resisting another Nazi occupation where in fact they were being deluded by the phony glare of US/EU dream.

Ukrainian protesters dreamed of Europe’s freedom and prosperity when Europe had actually nothing for them except bailout and long term chain of indebtedness.

I knew that all it took for the rallies to swell was controlled violence.

It only takes a couple of dramatic photos and some video footage of protesters being attacked and brutalized by police forces to be posted on the internet. And that’s it; you have a revolution on the go.

But what this whole thing needed to turn into another Tahrir Square, with Mubarak/ Yanukovych kicked out of power was a nice score of protesters gunned down by what should look as police snipers.

According to the Arab Spring’s manual; Rallies turn into a revolution only when someone amongst the protesters gets killed.

Day after day the violent protests in Kiev began to blow way out of proportion. It was hard to believe that this thing first erupted over signing some trade deal.

Likewise, Egyptian protests have been hijacked by Radical Salafists, Afghanistan Jihadists and of course MB (mother ship of all Islamist terrorist groups worldwide)

And ironically, in both the Egyptian and Ukrainian case, the US/EU have supported the radicals and militants. Western democracy works in a really mysterious way.

Whenever you spot firearms, Molotov cocktail bottles, or Kalashnikov guns and daggers, as in the case of Kiev’s protesters then we are watching not a peaceful march of democracy, as the American administration likes to call it, but a remotely guided rebellion and so called creative chaos – courtesy of Arab’s beloved, Mrs. Condoleezza Rice.

You see, there is a line any freedom protesters shouldn’t cross or even get confused about. That line is the thin red one that separates the regime from the state.

You have, as a political activist the right to criticize, denounce and even call for the fall of any regime but you must do that while keeping away from demolishing the pillars of the state you belong to and live in.

Taking down the regime is one thing, but demolishing the foundations of any sovereign state is a totally different story.

Anti-regime protests are signs of vibrant democracy, but demolishing the power of the police and military forces, and terrorizing the Judiciary system and media institutions are grave symptoms of a nation sabotaged by 4th generation warfare.

People often wonder why Egyptians pulled out a second revolution against Mohamed Morsi, the puppet of the International terrorist web of Muslim Brotherhood (MB)

Well, after the MB had risen to power they simply and swiftly embarked on demolishing the pillars of the Egyptian state and flagrantly replaced it with MB figures and alternative institutions.

MB got away with hijacking the Egyptian revolution but they were stupid enough to cross that thin red line.

Actually the revolutions that swept across the Arab World throughout the last three years targeted not dictatorships but had one goal in focus, demolishing and liquefying the major Arab countries – with the help of elements of extremism and fragmentation, namely Jihadists, Salafis, Takfiris and of course MB

Unfortunately this is exactly where Ukraine is steadfastly headed – with the stupid help of the far right and the new Nazis.

So I knew that hundreds in Kiev would be severely wounded and many killed … and most regrettably in vain.

I knew that organized gangs of ultra-nationalist militants, like gangs of MB militants in Egypt did, would be ordered to move all around Ukraine and target police headquarters, especially the anti-Riot security units and special forces (Berkut).

I knew that the Ukrainian police wouldn’t be able to hold back for long and that they would eventually fall and disappear leaving the city of Kiev and all of Ukraine defenseless. And that is exactly what happened in Egypt before.

I knew that after the security vacuum, the Ukrainian president would pack up in a hurry and flee the country with his closest aides.

After weeks of escalating protests and violence Ukraine lay naked and vulnerable, in the coldest days of a bitter winter, before the world to see the game of creating chaos in the name of democracy at work … once again.

I knew that nobody in Ukraine or Russia had seen this coming, simply because this whole revolution business had been orchestrated from outside the two countries.

I knew that this whole thing was nothing but the Arab spring’s drones targeted upwards.

It was pre-planned not only because of years of preparatory work of the so called western NGOs in Ukraine, or the American support for the fragile opposition and the earlier and ominous visit and dinner with the beastly John MaCcain, but actually because Russia was getting out of line … once again.

Hadn’t been for the strong Putin and his intervention in the Middle East, Syria and Iraq would have been history by now.

If the devastation of the Arab Spring hadn’t been somewhat curtailed by Russia, or hadn’t the US/Zionist conspiracy been exposed by the audacious stance of the Egyptian military we would have been looking at a totally different Middle East now – The so called new Middle East.

I knew that this whole Ukrainian chaotic situation was not about freedom or democracy. It was not even about Ukraine in the first place. I knew that the Russian bear was the target of this “time for democracy in Ukraine – stunt”

I’m not trying to downplay the right of the Ukrainian or Egyptian peoples’ to protest and express their dissatisfaction over economic hardships and political corruption. But I think we should look closer into who’s steering those revolutions into chaos and disintegration. We should also stop for a while and ponder over the similar patterns of those recent uprisings.

I knew that the US & EU would endorse the protesters’ riot and violence whilst presumptuously demanding the Russians to keep out of it.

But I think Self-restraint could sound obscenely ridiculous when asked of some international power whose very national security and borders are being under direct attack.

Besides any young politician around the world knows for a fact that Russia, given the current geopolitics of the Ukrainian crisis, absolutely can’t afford to give up or get out of Crimea.

So, I believe we are all going to witness a very exciting and dangerous spring.

15 thoughts on “Ukraine vs. Egypt: Chaos in progress”